Tell us about your needs!
Home // News & Resources // FAQs

What is waste heat?

The term “waste heat,” refers to the thermal energy produced by machines, electrical equipment, and industrial processes that escapes into the environment unused. Often this waste heat can be recovered and used for other purposes.

What are typical uses for waste heat?

The most common uses for waste heat are:

The first two options are generally economical, but require a local use for the recovered heat. The third option creates a product, electrical power, which can be consumed onsite or is easily transmitted and has high economic value.

How does waste heat to power work?

Waste Heat to Power (WHP) creates electricity by heating a fluid at high pressure, then expanding the fluid through a turbine to power an electric generator. In a classic steam Rankine waste heat system, the turbine is turned by a pressurized water vapor (steam), which has been boiled by the waste heat stream. The steam is then cooled off and condensed to liquid water, pumped back to high pressure, and begins the process again. Most WHP systems today are adaptations of the original Rankine design – a system that takes heat from an external source and converts it to power (work) through a closed-loop thermodynamic system. 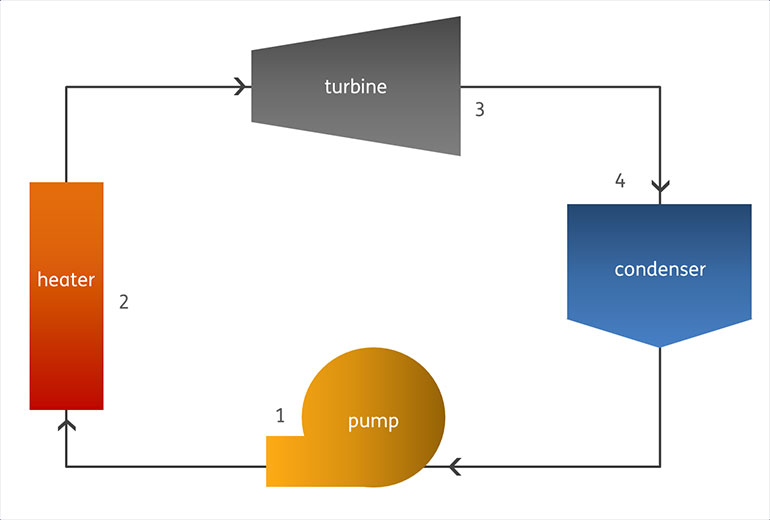 Where is the Opportunity for Waste Heat to Power?

The greatest potential source for WHP generation is in the industrial sector. In 2009, this sector consumed the largest amount of energy in the United States, accounting for more than 30 percent of all domestic energy consumption . Roughly one-third of this energy consumed by industry is discharged as thermal losses due to inefficiencies.

In the United States alone, it is currently estimated that 6,000 to 8,000 megawatts [MW] of electric generating capacity is available for recovery from industrial operations per year. Non-industrial applications, including exhaust from natural gas pipeline compressor drives and landfill gas engines, represent another 1,000 to 2,000 MW of power capacity, for a total of 7 to 10 gigawatts (source).

What are major sources of industrial waste heat?

Energy intensive processes—such as those occurring at refineries, steel mills, glass furnaces, and cement kilns—all release hot exhaust gases and waste streams that can be harnessed by a heat engine to generate electricity.

Some specific operations that create valuable, high-temperature waste heat are:

We are located about 40 miles south of Cleveland, in downtown Akron, Ohio. Our headquarters are in the former "Hamlin Steel" building.

How many patents has Echogen filed?

Echogen currently has 5 issued patents; and 42 patents pending. Echogen’s commitment to innovation is an integral part of our workplace.

Does Echogen do anything other than Waste Heat to Power?

Echogen’s engine is a platform technology that has potential far-reaching applications. We are currently funded under the DOE’s SunShot program to develop a solar-powered system that also uses sCO2 as a working fluid. Our work with the University of Texas and Lawrence Berkeley National Laboratory studying geothermal energy and carbon sequestration continues to yield new discoveries for our technology to help our environment. We are committed to researching new ways for our technology to benefit more industries and the planet.

Where did Echogen’s solution originate?

Echogen’s first prototype, completed in 2007, was a version of the “Champagne” absorption heat pump using carbon dioxide and a preferred secondary fluid. Echogen then converted the heat pump to a WHP engine, reducing to practice a first approach to the power generation cycle. A second prototype system, completed in early 2009, used pure carbon dioxide and proved that a transcritical cycle heat engine could be built to produce electricity from waste heat for commercial applications, and established a development pathway for first production units.

What is Supercritical CO2?

Supercritical carbon dioxide (sCO2) is a fluid state of carbon dioxide when it exceeds its critical temperature and critical pressure. In this state, it assumes properties intermediate between those of a gas and a liquid, and in fact loses the distinction between gas and liquid phases. Its high density manifests itself in an equipment set with a very small footprint. sCO2 is a non-flammable, non-toxic, non-corrosive, thermally stable working fluid. Because of these properties, sCO2 can interact more directly with the heat source, eliminating the need for a secondary thermal loop, and further reducing the total installed cost of the system.

Properties of supercritical CO2 allow for: 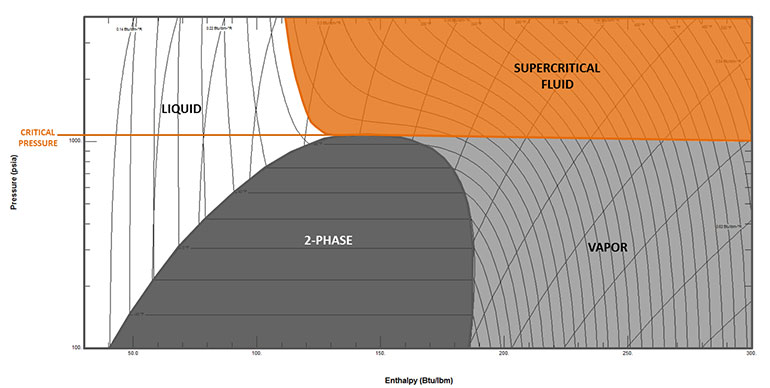